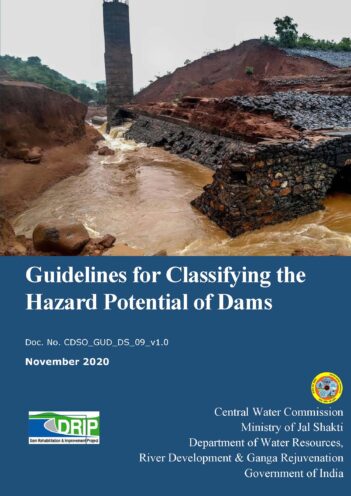 Ignacio Escuder (Founding Partner of iPresas) has participated in the development of the Indian “Guidelines for Classifying the Hazard Potential of Dams”, published within the framework of the DRIP Project (Dam Rehabilitation and Improvement Project).

The Central Water Commission (CWC) under the Ministry of Water Resources, River Development and Ganga Rejuvenation, Government of India has taken up the DRIP Project to improve the safety conditions of some of the existing dams in the country. Along with the implementation of a host of measures for improving the performance of dams of varying ages, it also envisages to prepare a set of guidelines that will extend further help to the dam safety professionals. One of them is the guideline titled “Guidelines for Classifying the Hazard Potential of Dams”, which provides a simple, concise, adaptable and reliable approach to identify those projects whose failure or description could potentially lead to most severe consequences and to assist dam authorities to take appropriate measures to deal with such critical issues.

Currently, India ranks third globally having 5334 large dams in operation and 411 under construction. Aspects such as climate change, ageing of the existing dams and high population growth may increment dam risks in the future. In addition, the high number of dams and the system complexity makes the decision making process more difficult. For this reason, this Guideline is important for dam owners to assess the hazard potential of the dams.

Globally, it is now acceptable procedures to classify hazard potential of dams based on consequences assessment for taking decisions to ensure better dam safety management. Consequently, CWC has developed this Guideline, based on estimated losses as a consequence of dam break in terms of loss of life as well as financial losses instead of the traditional approach based on dam height or reservoir volume.

This Guideline, together with those guidelines already published, can be downloaded from this link.

We use cookies on our website to provide you with the most relevant experience by remembering your preferences and repeat visits. By clicking "Accept all", you agree to the use of ALL cookies. However, you can visit "Cookie settings" to provide controlled consent.
Cookie settingsAccept all
Manage consent

This website uses cookies to improve your experience while browsing the website. Of these, the cookies that are classified as necessary are stored in your browser, as they are essential for the functioning of the basic functionalities of the website. We also use third-party cookies that help us analyze and understand how you use this website. These cookies will be stored in your browser only with your consent. You also have the option to opt out of receiving these cookies. But opting out of some of these cookies may affect your browsing experience.
Unrated
Unclassified cookies are cookies that we are still in the process of classifying, along with individual cookie providers.
Marketing
Marketing cookies are used to track visitors on web pages. The intention is to show ads relevant and attractive to the individual user, and therefore more valuable to publishers and third-party advertisers.
Statistics
Statistical cookies help web page owners understand how visitors interact with web pages by collecting and providing information anonymously.
Necessary
Necessary cookies help make a web page usable by activating basic functions such as page navigation and access to secure areas of the web page. The website cannot function properly without these cookies.
SAVE & ACCEPT